A SHORT HISTORY OF ENGLISH LITERATURE 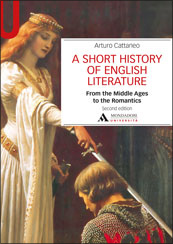 Like its first edition, the revised and enlarged Short History of English Literature is user-friendly. The intention is still to offer a literary history that is both scientifically reliable and accessible to students. Special care has been taken to clarify the basic terms, concepts, historical and cultural facts that define literary periods, before examining their authors in some detail. In presenting the writers, two leading principles have been followed: to concentrate on major works, and to illustrate them by quoting passages that make clear the critical point in hand. Literary and cultural insights enlarge the student's appreciation of a given author or theme or genre: some deal with specific aspects of English literature ("Shakespeare's Workshop", i.e. how he elaborated on his sources), some place it in the wider context of European literature (the Don Juan myth, for instance), some within Anglo-Italian relations (Chaucer and Boccaccio, Scott and Manzoni). The ever-growing diffusion of English as a literary language across the world has also called for a substantial revision and enlargement of the chapter devoted to literature in English and its major writers. New substantial aids for the student have been introduced: a section on literary genres (poetry, prose, drama), a series of boxes on the development of the English language (from Anglo-Saxon to global English), chapters on contemporary issues (Racism, Women Lib, Young People). The book also includes a Glossary of literary terms (with cross references to the word's first appearance in the text).