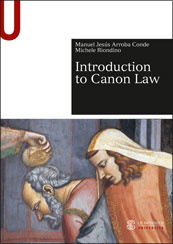 This book is primarily addressed to law students and its main goal is to introduce the study of Canon Law through the analysis of its current norms. Exegesis has not been chosen as main methodology for this book, but rather we have decided to use the fundamental basis of the entire legal order, meaning the centrality of every person within the ecclesial community. From this perspective, methodologically speaking, the guidance provided in this book is not the classical one of the legal commentaries. In fact, the explanation of the norms of the canons is proposed in a systematic and organized way, by grouping the subjects and explaining the juridical concepts that are peculiar to the law of the Church.

Authors Manuel J. Arroba Conde (Spain, 1957) is Professor of Procedural Canon Law at the Pontifical Lateran University, where he is Director of «Apollinaris» and he has been Dean of the Institutum Utriusque Iuris. He is also Ecclesiastical Judge, Consultor to various Dicasteries of the Roman Curia and Referendary of the Supreme Tribunal of the Apostolic Signatura. Among his numerous publications are the following: Diritto processuale canonico (2012, 6 ed.), Risultato della prova e tecnica motivazionale nelle cause matrimoniali (2013), Giusto processo e peculiarità culturali nel processo canonico (2016). He is also coauthor, with Claudia Izzi, of Pastorale giudiziaria e prassi processuale nelle cause di nullità del matrimonio (2017).